The UK and Renewable Energy

Renewable energy can be defined as energy that is from an infinite source, energy that cannot be depleted. The United Kingdom uses wind, wave and tidal changes to help generate energy as, unlike fossil fuels, energy from nature will never run out. 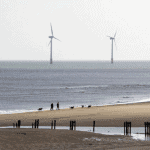 Onshore wind energy is one of the most cost-effective sources of renewable energy and is the largest source in the United Kingdom.

Delabole, Cornwall was home to the first wind farm in 1991 and since then commercial wind farms have proven themselves to be an excellent energy resource. A modern wind turbine in a well chosen location will generate up to 6.5 millions units of electricity annually.

Offshore wind energy was captured later on, with the first offshore wind farm in Blyth Harbour. Since October 2008 the United Kingdom has been the world leader in offshore wind with 22 projects, 1,075 turbines and an offshore capacity (MW) of 3,653.

On the other hand, wave and tidal energy also provides the United Kingdom with a renewable source of energy. Currently, the United Kingdom is the global leader in marine energy as we have the most tidal stream and wave devices installed in comparison to the rest of the world. This energy technology helps to increase the energy security and decarbonise our energy supply.

In terms of thinking ahead to the future, the wind and tidal stream energy industry is set to employ 20,000 people from 2035 with aims to export skills, services and products further afield, too.

The government has agreed a commitment to the EU to supply at least 15% of their total energy needs by 2020, solely from renewable energy resources. This is equivalent to around 35% of its electricity. The main policies that are promoted within this commitment are the Renewable Transport Duels Obligation for transport fuels and the Renewables Obligation which refers to generating electricity specifically.

The benefit of using renewable energy instead of fossil fuels is environmental. Fossil fuels contribute to greenhouse gas emissions, acid rain and air pollution, so movement away from them can become increasingly beneficial. However, it is important that each new renewable energy infrastructure is managed correctly, as imperfections in the location choice or development of the supply chain can be costly and cause damaging consequences to both the environment and continued evolution of the renewable energy industry.

Despite this clear progress, the United Kingdom still only gets 4.1% of its energy from entirely renewable resources. This is low in comparison to Germany who gets around 5.9% of its energy from renewable sources, but this is largely due to the feed-in tariff for solar energy which just goes to prove how important it is to have the appropriate governmental schemes and laws in place to support the transition away from fossil fuel to renewable energy.

Government reports outlined on Gov.UK show that the renewable electricity capacity has has grown in Quarter 2 or 2013 by 38% to 19.5 and this growth is reflected across the majority of sectors. In addition to this, biomass electricity increased between July 2012 and June 2013 by 1.6 GW, the total installed capacity then reaching 4.9 GW.

Whilst targets have not been set for biofuel beyond 2014, the energy source is a clear winner in terms of a cleaner, greener future and a surefire way to help transport goods with a view to environmental friendliness.

The UK supplied 3.33% of biofuels to EU road transport in 2009/10, which was slightly higher than the target set by the Renewable Transport Fuels Obligations Order. When reviewing all the various renewable energy resources alongside the targets the UK has set to them it is clear that great progress is being made towards a cleaner and greener future, both for the United Kingdom and the EU.

For more information about our environmentally-friendly products, get in touch with Polythene UK today by calling 0845 643 1601*. You can also contact us online.