Plastic-Eating Fungus!
Posted by james on March 28, 2012 in Newsletter 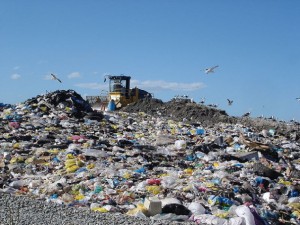 Yale have discovered a fungus that eats plastic…

Plastic is possibly the greatest commercial creation of the last 150 years. It’s made into many things that, on a worldwide scale, we all use on a daily basis, not least the humble checkout bag.

The problem is that polyurethane is not biodegradable, and although recycling plastic is the way forward to limiting the amount of ‘new’ plastic going to landfill – what about the millions of tonnes that are already there – and will be for centuries to come?

To date scientists haven’t found a single way to break down polyurethane. Fortunately however, nature has. Scientists from Yale University, Connecticut, have recently found a fungus in the Amazonian rainforest that naturally eats polyurethane. Researchers identified the fungus as Pestalotiopsis Microspore, which exclusively subsists on polyurethane. It can also grow in an anaerobic (air-less) environment, which will hopefully allow it to take root in the deepest regions of our landfill sites – brilliant!

Jonathan Russell, one of the group of Yale scientists, has managed to isolated the enzyme that the fungus uses to decompose plastic. It is hoped that the extracted chemical will eliminate plastic waste and help in bioremediation projects.