Sponsors Of Oxford United Ladies FC
Posted by james on March 12, 2013 in Newsletter

We are delighted to say that with our full support, the Oxford United Ladies team are going from strength to strength. Their performances this season have been outstanding and following their recent victory over Newcastle they are now in the Women’s FA Cup 5th round.

Captain Sahara Osborne-Ricketts paid tribute to her side, “It’s incredible, I’m buzzing, I’m just so glad we got the win in the end, the girls played so well and worked so hard. It’s amazing I can’t believe it. We had a few nervy moments, but we come through it and this is up there with the best results of my career.”

Goals from Katie Stanley and Natasha Caswell saw the U’s book a place in the fifth round of the cup in front of over 700 spectators at the Kassam Stadium. Oxford’s Ladies can now look ahead to the fifth round clash against Everton. 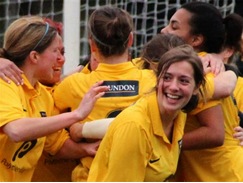