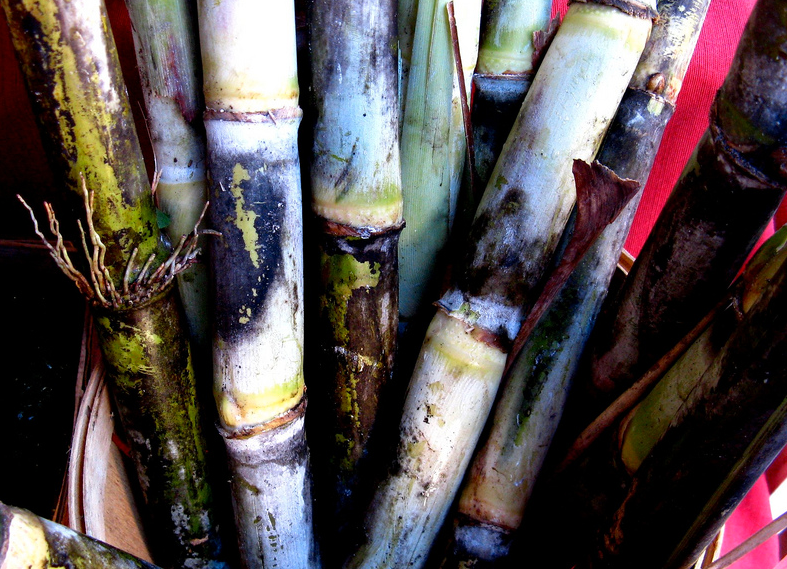 A History of Sugarcane

Sugarcane is described as, “any of several species of tall perennial true grasses of the genus Saccharum, tribe Andropogoneae, native to the warm temperature to the tropical regions of South Asia, and used for sugar production.” This is an accurate description but a look at man’s relationship with sugarcane indicates how sought after and important this particular species has been to civilisations and economies for thousands of years.

Sugarcane stems grow to tall cane stalks ranging from three metres to four metres in height and about five cm in diameter. The mature stalks are composed of 11-16 percent fibre, 12-16 percent soluble sugars, 2-3 percent non-sugars and 63-73 percent water. Sugarcane is highly sensitive to climate only growing in tropical regions. Other environmental issues that can affect the plant include soil type, irrigation, fertilisers, insects, disease control and the harvest period.

The average yield of sugarcane stalks is between 60 and 70 tonnes per hectare per year Environmental conditions can influence greatly the yield. With the advent of new technology, sugarcane has become and in-demand commodity that is used both for commercial products and livestock fodder.

Many consumers are surprised to find that sugarcane is the world’s largest cultivated crop. The Food and Agricultural Association (FAO ) reports that in 2012, approximately 26 million hectares existed in more than 90 countries. The annual harvest in 2012 was 1.83 million tonnes. Brazil was the leading producer of sugarcane and was followed by India, China, Thailand, Pakistan and Mexico.

The first evidence of sugarcane appeared in New Guinea about 600 B.C. India was late to the game but farmers in India first dedicated large areas for growth of sugarcane beginning between the 6th and 4th centuries B.C. Persians and Greeks discovered the “reeds that produce honey without bees” shortly after this period. Persians and Greeks contributed to the spread of the industry and significantly expanded demand. Sugarcane remained an expensive spice until the 18th century during which time India remained the world’s single biggest producer.

Europeans were anxious to develop their own sources for this spice. The discovery of the Americas proved the ideal opportunity for new sugarcane sources. Christopher Columbus first brought sugarcane grown in the Caribbean to Europe in 1492. The success of the product was astounding.

During the colonial era when triangular trade of raw materials from the New World in exchange for slaves dominated European economies, many sugar products became more available on the Continent. Rum that was distilled in the Caribbean was soon being exported to Europe and North America. Profits derived from sugar sales were spent acquiring new manufactured goods but the development of sugarcane in the Americas is deeply rooted in slave trade.

Today, sugarcane is vital to economies in Brazil, Guyana, Belize, Barbados, Haiti, the Dominican Republic and other nations. France was so enamoured with sugarcane that it traded snowy Canada to Britain for tropical Guadaloupe, Martinique and St. Lucia. The Dutch suffered the same addiction, trading rights in New Netherlands (today New York) for rights to Suriname, a productive sugar colony in South America. History is dotted with sugarcane trade. At one time, Cuba was a leading producer of sugarcane but since the revolution, production has suffered. Were the US embargo lifted, Cuba might once again step up production.

In 1833, slaves were liberated in the UK. Many former plantation workers took advantage of their new freedom and declined to work the plantations. This event sent economic tremors through the UK economy.

In efforts to resolve the labor demand, UK and other European plantation owners looked to new sources for labor, including China, Portugal and India. This led to a new legal system of “forced labor.” Under the new laws, sugarcane plantation workers were deemed indentured servants rather than slaves. However, the differences were nominal. Many indentured servants did not survive their tenure. The first ships transporting waves of indentured servants from India departed in 1836.

One result of indentured servants was that transplanted Indian, Chinese and southeast Asians soon were spread around the world. Today, sugarcane plantations and ethnic Asians still exist in countries like Malaysia, Ceylon, British Guiana, Jamaica, Trinidad, Mauritius, Grenada and in many more countries.

Brazil remains the global leader in sugarcane development. New demand from chemical companies has sparked a rebirth of sorts through Brazil and other countries. This is the result of the product’s net zero carbon footprint used in the manufacturing cycle.

We have created innovative new polythene products from sugar cane which are carbon negative. Find out more here.