We are now holding stocks of Verisafe flame retardant shrink film. Verisafe is rated the world’s best shrink film and has been tested worldwide in the most extreme environments.

Verisafe shrink film is extremely durable with a thickness of up to 320 microns and is capable of withstanding extreme weather conditions without flapping or chaffing like other conventional covers. We can offer sizes from 50 to 350 Micron (Mu) from 30cm to 12m.

It is used where large oversized industrial products and equipment need to be protected from damage during transport or storage. When applied the shrink wrap bonds to itself and forms a drum tight covering that is both tear resistant and UV resistant (due to the addition of UV inhibitors and EVA in the plastic) enabling it to last up to 2 years in the outside without damage.

Our Verisafe FR300 & FR320 flame retardant shrink film for scaffold, encapsulation and containment is an industry leader as it is certified LPS 1207 and 1215 BRE audited.

Shrink wrap rolls are white in colour and available in different sizes from 5m wide up to 12m wide in standard grade, or 7m x 15m in the flame retardant option. Due to technological progress and the increasing demands in terms of safety, fire protection and ecology on construction sites, Verisafe shrink film is by far the best product to choose.

The Verisafe range of shrink film and flame retardant shrink film is now recognised throughout Europe as having the highest product specification in this area. Verisafe Films have been used on some of the largest projects in both the UK and across Europe in such areas as oil & gas installations, oil rigs, large pharmaceutical operations and roadway and large infrastructure projects where the highest specifications and standards are expected at all times.

The City of Adelaide, also known as The Carrick, had been languishing in Scotland for years. Built in Sunderland in 1864 the grade A-listed ship, which is five years older than the Cutty Sark and the oldest surviving Clipper in the world, has lain on a slipway in Irvine, Ayrshire, since 1992.

A group of enthusiasts from Sunderland wanted the vessel returned to the River Wear, but a consortium from Adelaide, South Australia beat them in a competition to secure the vessel as a tourist attraction in 2010.

The clipper ship, which brought thousands of settlers to South Australia between 1864 and 1886, had been in the Netherlands for four weeks for fumigation. Following this quarantine and preparation stop the City of Adelaide recently left Rotterdam on its way to Adelaide for the last time – 149 years after its first journey to the city.

The clipper ship is due to arrive in Australia between February and April 2014, however it must first safely navigate Cape Horn* – our Verisafe flame retardant shrink film was the obvious solution to provide the complete protection this priceless artifact required. 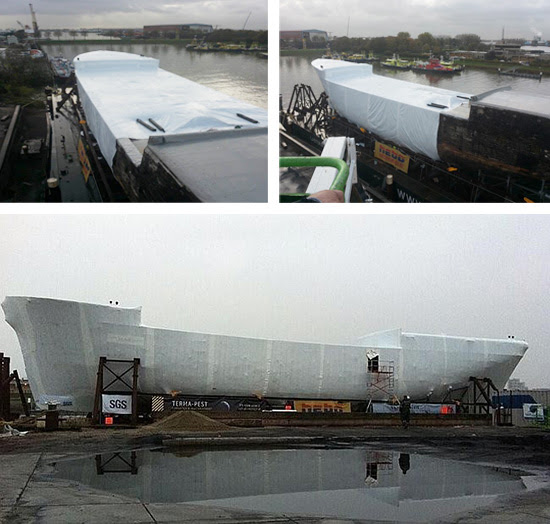